More than ten years since the world saw Bitcoin, the most well-known cryptocurrency, and its revolutionary features with blockchain. There are several blockchain project ideas in the works after many years of development, and they’ve already grabbed the attention of people from all over the world. There are several decentralized apps available on the market these days that can trade and access various features. Many people may now be wondering why so many blockchain projects are available today. On the other hand, the enormous number of blockchain initiatives planned for 2022 might perplex customers. Do you want to invest in Ethereum-based public blockchains? Do you want to integrate with private blockchain projects like Fabric or Corda that have the potential to change the blockchain industry? A blockchain project list might help you clear up your doubts and make the best decision regarding blockchain development.

The Journey Of Blockchain

In contrast, some users or organizations may be open to the prospect of moving to new blockchain initiatives. However, if you don’t have the appropriate help, you will likely lose your bearings along the journey. The following section summarizes several important alternatives that could be critical in bringing your blockchain project ideas into reality. If you’re about to implement blockchain, here is a list of 30 Questions To Ask Before Implementing Blockchain In Business.

Top Ideas For Blockchain Projects In 2022

The first on the most impressive blockchain projects list will be AP Moller-Maersk’s TradeLens business blockchain. The supply chain information of AP Moller-Maersk, a corporation based in Denmark that specializes in shipping and logistics, will be digitized using its TradeLens blockchain. After debuting in August 2018, TradeLens has developed. Maersk has incorporated blockchain technology into its shipping and port operations to handle nearly 50% of container ships worldwide successfully. In 2020, TradeLens handled around 30 million containers, 12 million documents, and 1 billion shipments. In 2020, TradeLens’s performance was more than twice that of the previous year. In addition, Maersk has partnered with Microsoft in the marine insurance procedure field with blockchain technology.

The Boeing SkyGrid is a major corporate blockchain that was the most outstanding blockchain project idea of 2018. HorizonX, Boeing’s venture capital arm, has invested in Skygrid’s development. It’s a blockchain-based air traffic control system for managing and communicating with crewless aircraft. Most significantly, SkyGrid obtained FAA approval for low-altitude work allowing drone pilots. SkyGrid is also available as a free iPad app, giving you more flexibility when traveling. SkyGrid records data and maintains a permanent record to assist with package delivery and production inspections. This can be done by using blockchain technology such as Hyperledger Fabric and Go Direct. In the future, SkyGrid can create autonomous flying taxis utilizing blockchain platforms like Hyperledger Fabric.

China is a global leader in innovation and blockchain. Baidu, the Chinese search engine, and its affiliated financial firm Du Xiaoman Financial have combined more than 20 blockchain solutions. Libra Chain is the most notable example among the blockchain project proposals Baidu and Du Xiaoman Financial presented. Currently, Libra Chain is the infrastructure for three Chinese Internet courts. Virtual trials handle most of the copyright and e-commerce disputes. Wei Xiao led the development of the Libra Chain, which successfully supported the filing of over 35 million electronic pieces of evidence in the Beijing Internet Court under his leadership.

The Paxos Settlement Service’s ability to execute Credit Suisse opens the doors for yet another exciting entry into the field of blockchain project ideas. A significant banking corporation based in Switzerland is also utilizing Enterprise Ethereum. As well as the Paxos settlement service to manage transactions in U.S.-listed equities through Nomura’s Instinet broker-dealer. Blockchain technology is supplied by the Swiss financial services corporation. This may help parties that want to make direct transactions with one another. Consequently, this can reduce the need for conventional intermediaries and speed up the calculation process.

Novartis has a prominent role in developing blockchain solutions in the pharmaceutical industry. As one of the world’s major pharmaceutical corporations, Novartis is a vital member of the EU blockchain group dedicated to eliminating outdated or incorrect prescription information. Novartis has collaborated with Merck and the Polytechnic University of Madrid to develop one of blockchain’s most innovative ideas in the pharmaceutical industry, PharmaLedger. The Novartis blockchain-based software allows you to scan drug packages and obtain updated information from producers in real-time. Patients may also use scan codes to access data.

Honeywell is also one of the early adopters of blockchain enterprise technology and other notable innovators in the field. A large industrial organization has successfully sent more than 2 million aviation quality papers to a blockchain registry platform, according to its website. Honeywell successfully transfers aviation quality records using Hyperledger Fabric’s functionalities. As a result, it may guarantee that its client base has access to all required documents. Honeywell, a major supporter of the blockchain, has launched its cryptocurrency called HON. Honeywell also runs the GoDirect Trade marketplace, which utilizes blockchain technology. More than 10,000 users have joined GoDirect Trade since it began in March 2017.

The Singaporean bank MUFG is the first major bank to embrace blockchain technology. He currently runs a group of financial firms that employ blockchain technologies such as Hyperledger Fabric, Corda, Hyperledger Indy, Ethereum, and Quorum. ING Group is a global financial services firm that helps clients meet essential needs through innovative technology solutions. The company provides secure payment processing to traders, processors, and other businesses in nearly 200 countries and territories. ZKPs are a type of zero-knowledge cryptography that has been widely used in privacy coins. They’ve recently introduced the bulletproof project, their best version of zero-knowledge proofs to date. It’s an expansion for any distributed registry system that offers more data security and privacy.

Samsung’s IT department, Samsung SDS, has helped develop blockchain projects for local hospitals, airports, and governments. To stake its claim in the blockchain industry, Samsung may make the most of Nexledger’s blockchain platform. The essential component of Samsung’s various blockchain initiatives is a comprehensive medical claim processing service. With this service, patients can submit claims at an emergency department, by phone, or with any device.

The name Visa is now frequently used to describe blockchain projects. The Visa network’s vast number of access points, including around 70 million retail locations, is its major advantage. Central banks are starting to pay greater attention to issuing digital currencies. Visa has several notable initiatives, one of which is “Visa B2B Connect.” It makes use of Chain’s blockchain technology to provide the most acceptable financial payment solution for cross-border transactions. This project may allow you to conduct all worldwide payments in a cost-effective, secure, transparent, and quick manner.

Another significant player in the sector of new blockchain projects is Tencent, a Chinese firm headquartered in Hangzhou. The most crucial benefit for Tencent as a developer of innovative blockchain ideas is the blockchain it has created. The tax authorities in Shenzhen may now issue around 10 million invoices thanks to Tencent’s blockchain. Tencent has set up WeBank, a blockchain platform based on FISCO BCOS, Open & Source, or Be Credible. The Financial Blockchain Consortium Shenzhen Consortium (FISCO) contains more than 100 Chinese firms.

HSBC is a major player in the financial industry with a long-term vision for blockchain project ideas. The London-based bank is employing blockchain to improve the efficiency of its currency movements across international branches. HSBC’s Digital Vault, for example, is a blockchain-based platform that aims to digitize all private placement transactions. The Digital Vault is a blockchain-based platform developed by HSBC and its securities division (HSS). When the market is growing, they want investors to access data on this platform.

The discussion of blockchain project ideas could not have avoided Walmart’s food tracking project. To detect contamination and other food safety concerns, Walmart is using a blockchain-based Food Tracking Initiative. It can keep track of almost 500 items, including meat, fresh leafy greens, fish, and coffee. Surprisingly, the Walmart blockchain project’s food tracking software allowed users to access detailed data on the source of contamination within an hour. In addition, Walmart is looking into a pilot test with US Customs and Border Patrol to monitor imported products.

An important player in Australia’s mining sector is also a key participant in developing new blockchain venture concepts. BHP has applied the blockchain to automate several processes. Verifying vendor identification and recording ESG or environmental, social, and corporate governance criteria are just a few of the primary operations digitized using blockchain technology. BHP is one of the largest blockchain partners for BHP. The organization completed the first iron ore trade on the blockchain with China Baowu Steel in 2020, using MineHub as one of its main projects.

MetLife is working on many blockchain projects, one of which is Vitana. MetLife LumenLab, a research center in Singapore, recently published a whitepaper regarding the Vitana initiative. This is an insurance project that considers parameters. On the other hand, MetLife utilizes Vitana to provide insurance to pregnant women to assist them in dealing with any problems that may occur.

Daimler is a German multinational corporation that produces high-end automobiles like the Mercedes-Benz. They are presently working on a blockchain project with Circular to monitor carbon dioxide emissions in their cobalt supply chain. The main objective is to concentrate on transparency and reduce CO2 emissions. Furthermore, they wish to keep track of any additional secondary material due to their cobalt mining.

Shell claims that it is working on a blockchain project to develop a decentralized digital passport system. This is one of the few blockchain project ideas they’re looking at right now. The firm will authenticate all components, equipment, and goods in this project, establishing a data flow system in which all data is securely handled and preserved.

Wrapping up And Further CTA’s

Blockchain projects for 2022 have some very intriguing concepts. However, several tools are not included in this list, and others are still developing. One of the causes of increased interest in blockchain is the slowly growing interest in such initiatives. Many blockchain projects are also altering the traditional definition of the blockchain. Instead of simply providing platforms for trading and mining bitcoin, blockchain initiatives seek to use predictions and data. Blockchain’s future appears to be very bright. Or, connect with the blockchain experts at Clustox, let’s resolve the development notions into your ideas.

PrevHow Can Blockchain Technology Transform The Healthcare Sector?March 8, 2022
30 Questions To Ask Before Implementing Blockchain In BusinessMarch 10, 2022

Are you a sports lover? Which is your favorite game? Be it Rugby, Football, Cricket,... 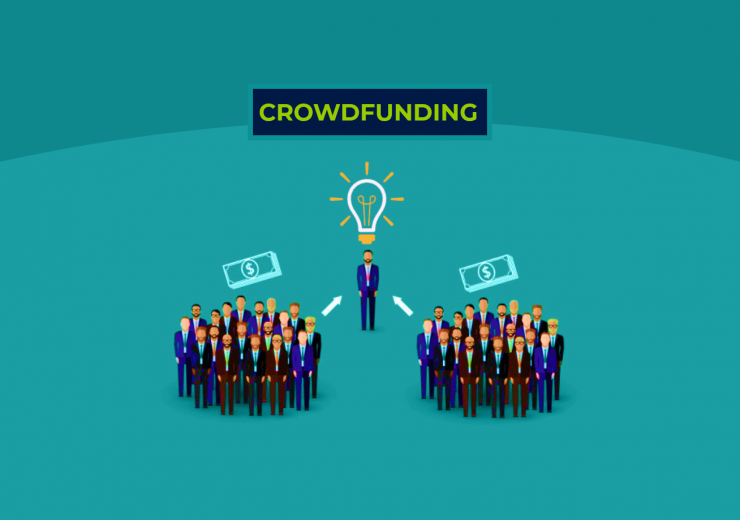 What Is Crowdfunding And How Does It Work For App Development?

When someone wanted to fund something in the past — whether it was a project, a...