With many resourceful teams tuning brilliant ideas into reality, tech startups seem to take the lead. These new software business setups seem to be growing rapidly, providing their customers with the smartest possible solutions.

The tech industry has always been on the verge of evolution. Unlike the early stages, the solutions provided these days are much more advanced. While turning the concept into a real thing is the actual goal, all this can be ultimately worthless until it can generate an actual profit.

This might leave the founders or development team at a greater risk that the competitors might surpass you. So, the best idea is to take baby steps instead of aiming for perfection, and to develop an MVP is an excellent valid idea.

What is a Minimum Viable Product

An MVP or a minimum viable product is basically a bare-bone version that refers to the core features of your product. This can help you have a clearer understanding or idea of whether your project is practically going to work or not.

This will not only help you to save a lot of resources but will also give your product a run in the market more quickly and cheaply. Another thing to remember about an MVP is that the goal is to not just identify if it works but also something that their perspectives will love.

For several developers, building and planning a minimum viable product is to figure out what features they can squeeze into the initial version of the app according to the time and budget restraints of the client.

While for business owners or clients, an MVP is built to extend their company or start a profitable business. This just does not limit purely checking how well the product is likely to perceive the market and business needs. 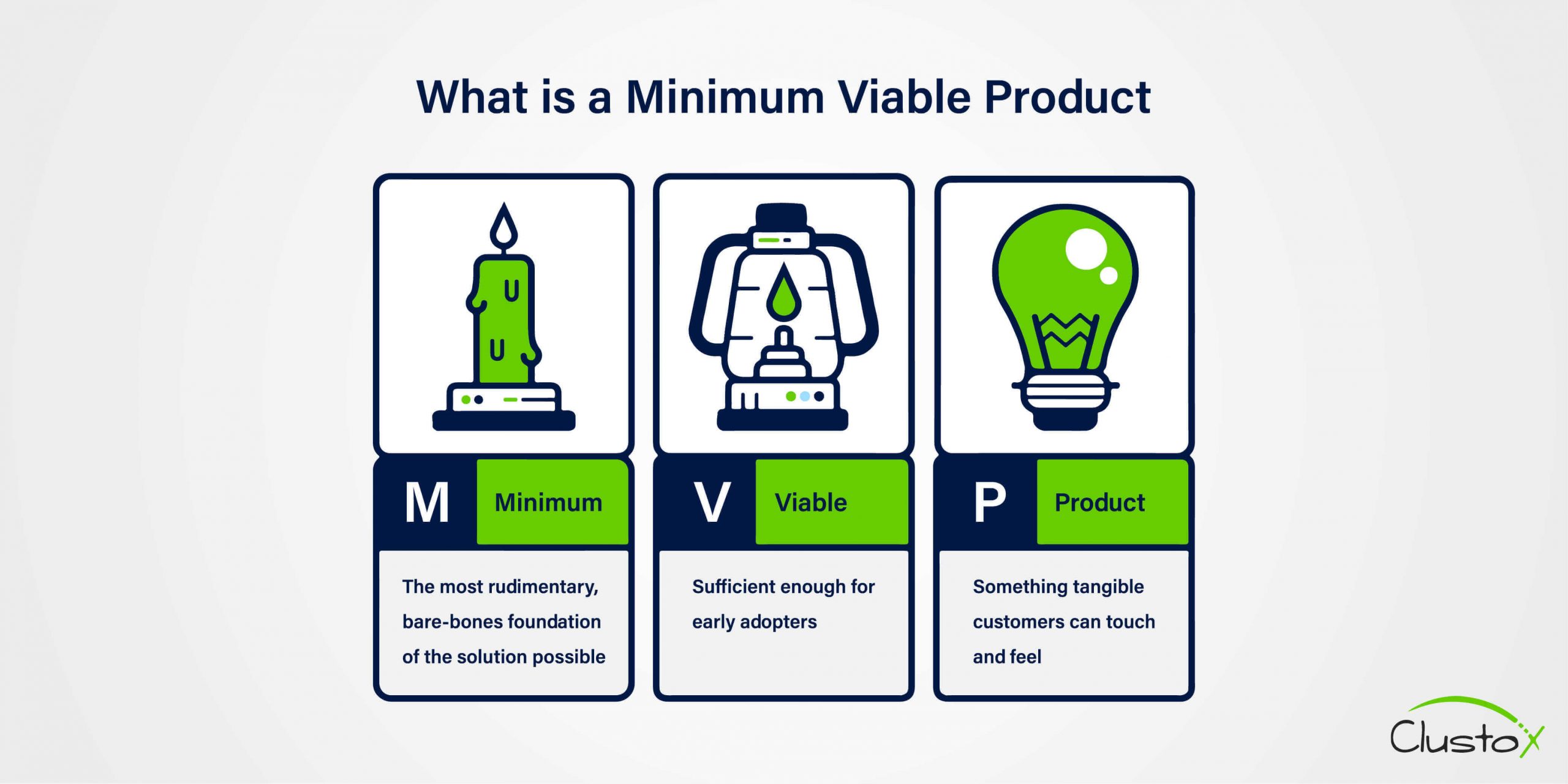 Importance of Building an MVP

An MVP holds so much significance as it helps to take the initial steps and start working on a project. It is also the simplest way to identify how practical the entire idea of the product that you might be planning to launch in the market.

With the intent of easy and rapid development within a minimal budget, a minimum viable product lets you have a clear insight into the industry by collecting user feedback on the product. These reviews can be later used in the later iterations to overcome the issues and come up with a better plan.

This test of the hypothesis of a particular software can certainly help you a lot to solve a customer problem without having to get into much hassle. It is also quite beneficial in developing a final product with the least bugs and errors. 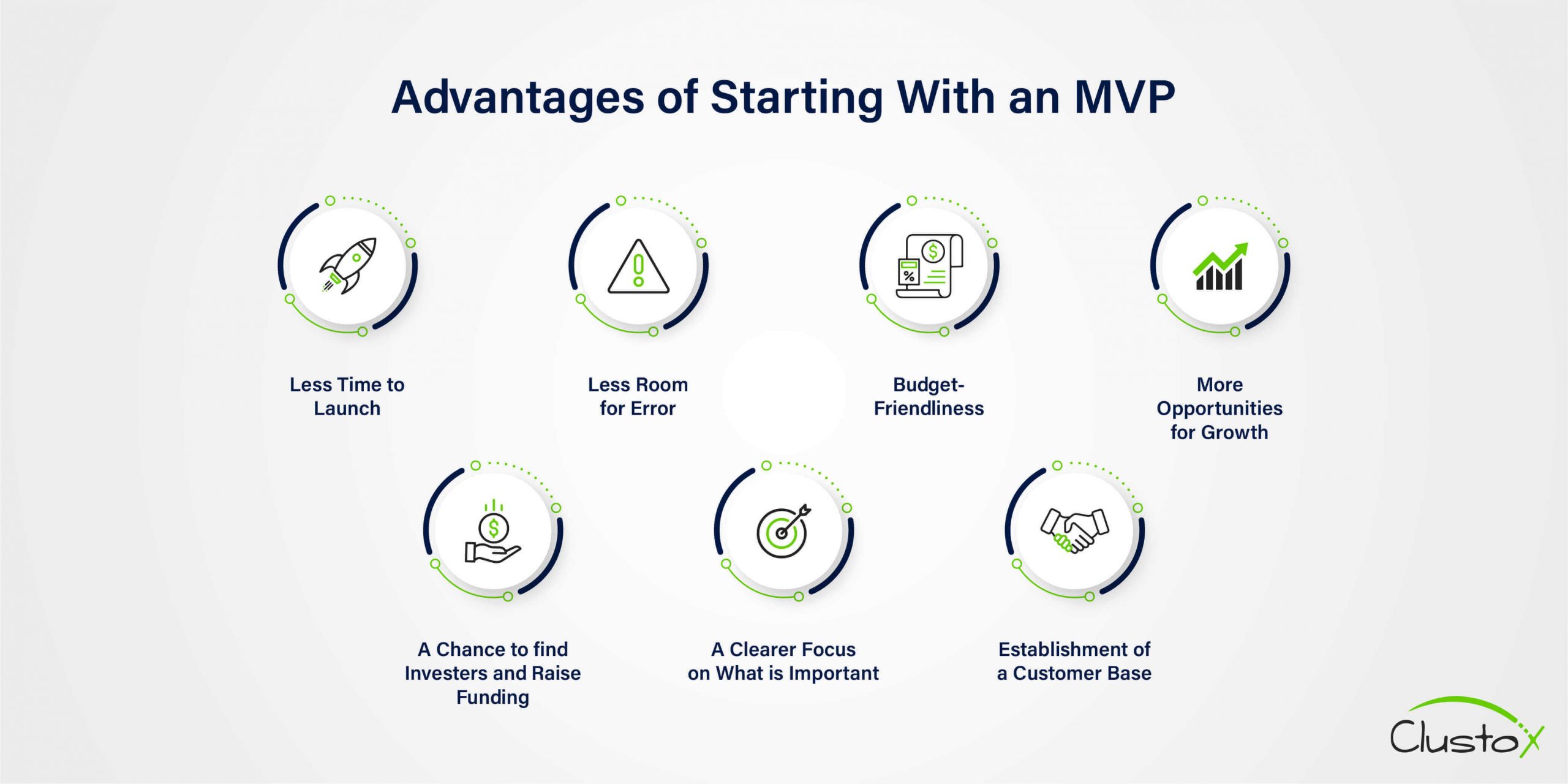 Most commonly, a minimally viable product is divided into two main categories, which are:

As the name suggests, low-fidelity MVPs are a simpler, easier-to-create product version. It relatively provides more basic outcomes that can be used to comprehend the requirement of the potential prospects.

While it might be an elementary version of the product, it holds a lot of value in collecting customer feedback without spending too much money. Some of the types or examples of low-fidelity MVPs are:

On the contrary, a high-fidelity MVP is built to help identify whether your potential clients are likely to pay for your provided solution. While it is also used to collect customer data, it is comparatively a much more complex form of a product.

However, it provides more profound outcomes that are worth all the time, effort, and money. Some of the most common types of high-fidelity MVPs are:

The MVP estimate cost for an internal team setup is shown below:

Here is also an overall summary of the average costs of hiring different development teams:

Here is the cost estimation according to regions as well:

Here is the tech stack that is needed to develop an MVP:

POC, or Proof of Concept, is basically used to validate your app idea before the launch of an MVP. While an MVP is how your potential market prospects will conceive the app, POC is used to check if your idea is even practical enough to be implemented.

Now the actual concept is how to decide if your project needs POC or an MVP. The answer is pretty simple! If you want to identify if your app idea is technically possible to introduce, you should proceed with POC.

For this, you can pitch your idea to multiple investors to close the most beneficial deal. MVP is the next step of POC once your idea is feasible enough to understand the potential target audience.

How to Build a Minimum Viable Product

Now that you have a complete idea about what an MVP should look like and when it should be built, here are three steps to understand how to build the minimally viable product: 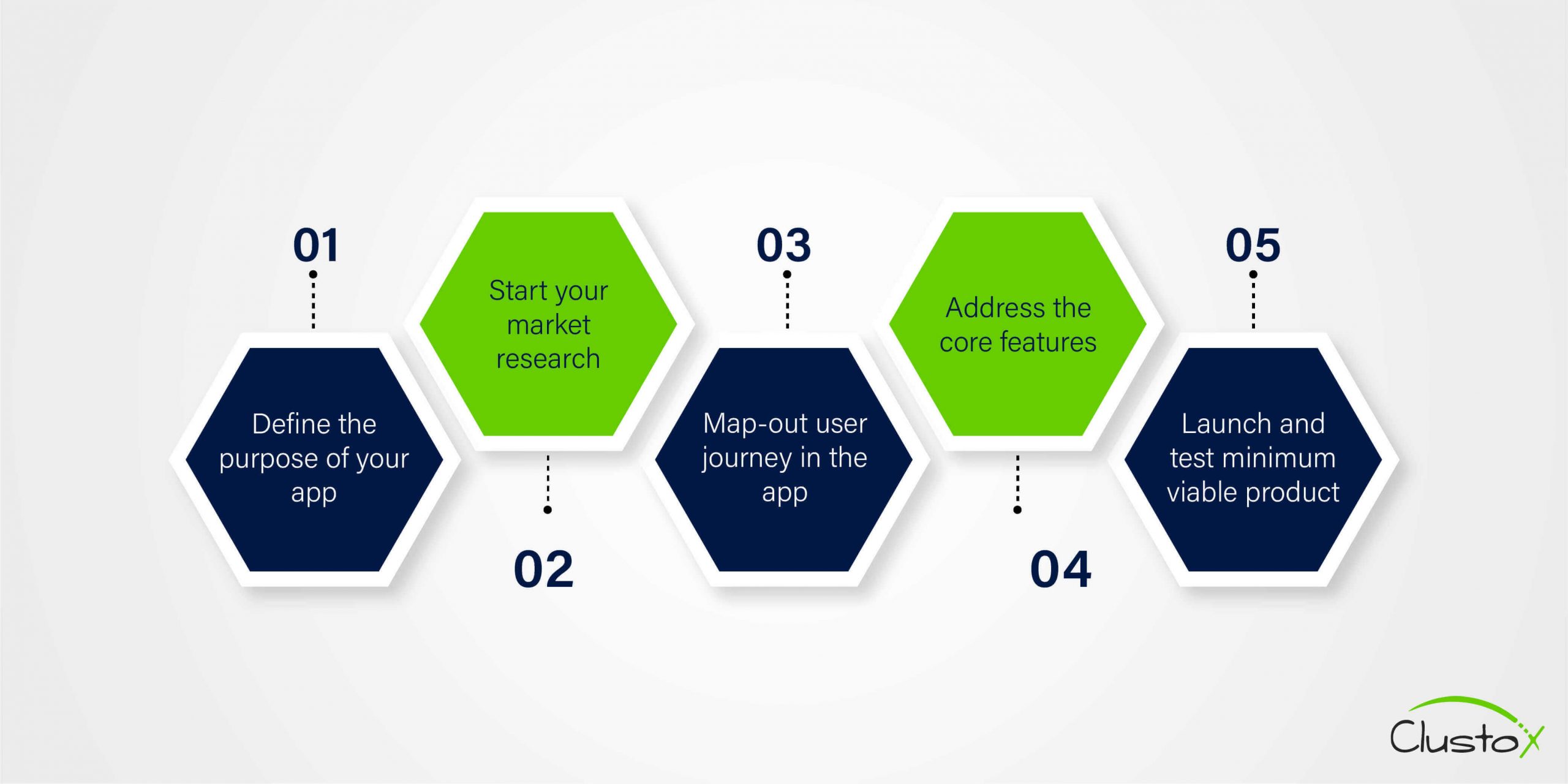 Define the Purpose of an MVP

The first and foremost step before launching an MVP of your project is to do ideal market research and properly figure out the right purpose of an MVP. This will help guide you to the right path and ensure that you have enough information to get started in the industry.

Since hundreds of apps are available in the market, you need to make sure your app offers something unique while understanding the pain points of your potential prospects. Also, find out if your app will solve their problems.

Once you know your app idea, the next step is to figure out how it can really make its place in the target market. It is also one of the most important steps you need to determine before launching your MVP.

Having a great app idea is just not enough. You also need to know how to sell your idea and who exactly is your potential target audience. This would require you to fetch all the relevant information about your competitors and ideal customers to have more detailed insights into the industry.

Mapping out user flow is an excellent way to determine their path while using your provided platform. No matter what niche your app idea belongs to, finding out more about the user journey will give you a clearer idea of your goals.

This way, you will also be able to find out where there might be any loopholes left in your plan and where things need to be improved for a better outcome.

After you have defined the user journey in detail, the next step would be to add features in your MVP that will let your target audience navigate through your app without having to get into much hassle.

While this might sound a bit overwhelming, the secret recipe is to only look into the core idea of creating your app. For a better understanding, you can also start by segregating your features into three categories: nice-to-have but not necessary, main features, and not-important or needed features.

Finally, it is time to launch and test your MVP in the market. At this point, you are likely to be aware of the core features of your app, the user journey, and your target potential audience. All this information is significant to build a successful MVP.

Creating the MVP will work as a stepping-tone in updating your app, getting user feedback, and creating something phenomenal in the future. 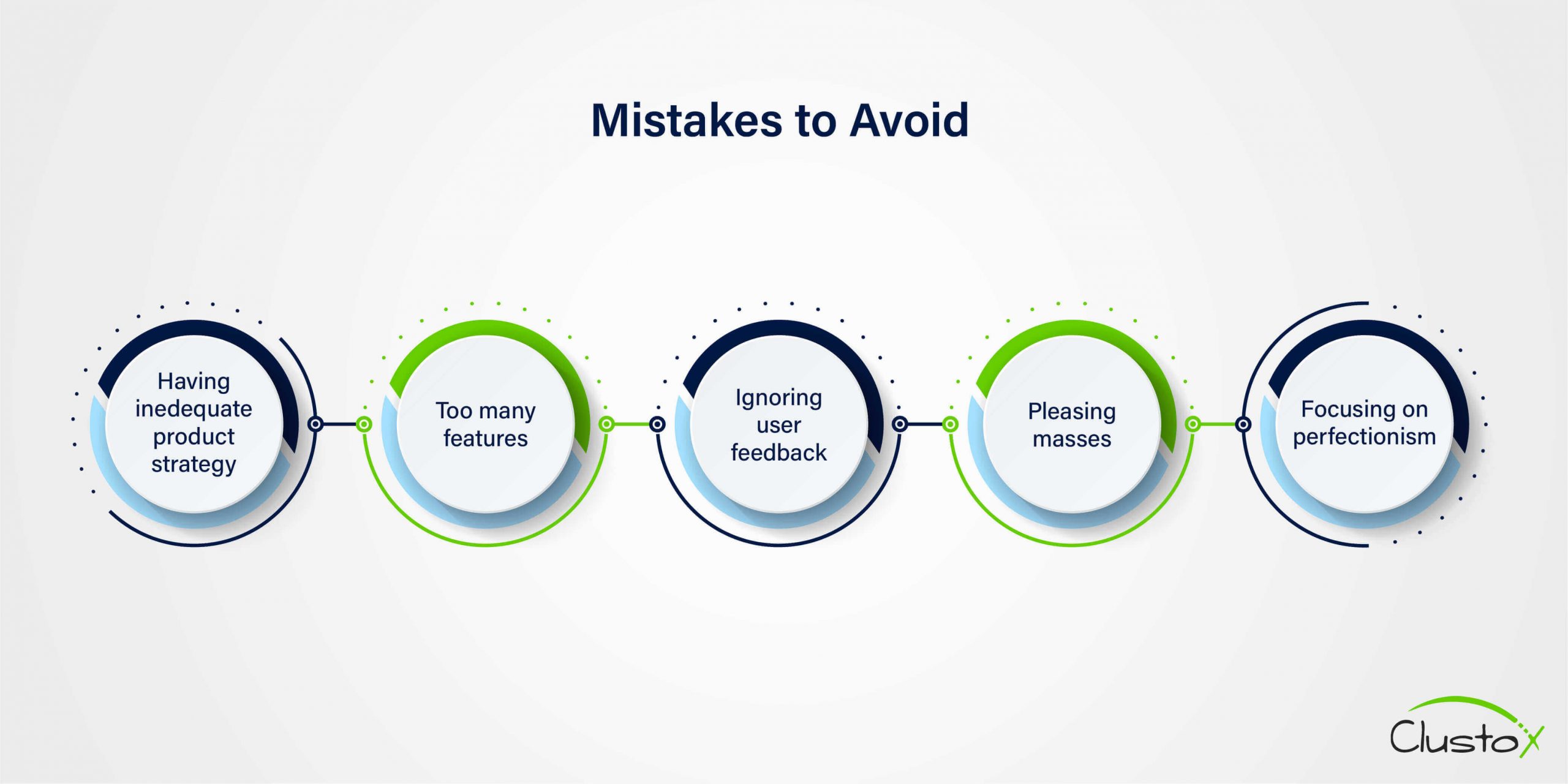 To put it all in a nutshell, building an MVP plays an important role in your product development cycle. However, not using the right approach to build and launch your MVP in the market can lead to a waste of time, effort, and money. So, make sure to follow the right technique and focus on developing a basic structure or foundation of your product with the main features rather than aiming for perfectionism in one go.

We withstand a constant record of building lucrative websites, apps, and software design. Our team has supported the building of popular startups and enterprises – and has a worldwide delivery reputation.

Whether looking for top app development companies to grow your business online or targeting to launch a brand-new project, Clustox IT experts can help you put up your business and modernize it digitally.

We withstand a constant record of building lucrative websites, apps, and software design. Our team has supported the building of popular startups and enterprises – and has a worldwide delivery reputation.

Whether looking for top app development companies to grow your business online or targeting to launch a brand-new project, Clustox IT experts can help you put up your business and modernize it digitally.

What comes after a minimal viable product?

The next step after developing an MVP is an MMR, which stands for Minimum Marketable Product. It is a more advanced and better version of an MVP that can finally be launched into the market.

How much does an MVP cost?

The cost of developing an MVP can depend on so many different factors that, include:

How to build an MVP?

Here are the five simple steps through which you can build an MVP:

PrevWhat is Better: Staff Augmentation vs. Consulting Services?November 3, 2022
Clustox has been included in the Fastest Growing 500 Software Development Companies by TopDevelopers.co!December 20, 2022

Blockchain And Supply Chain – What Does The Future Hold?

The absence of openness in today’s supply chains is the most severe issue. Due...